The Curious Case of Alaed 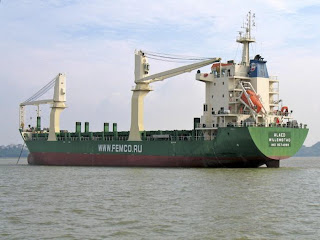 Russia is now playing "hide the weapons" with the rest of the world.  Moscow hired FEMCO, which leased the Netherlands/Antilles-flagged merchant vessel Alaed, to transport weapons (to include MI-25 helicopters and munitions) to Syria:


So, what's next for Alaed? Continue its transit to Syria without insurance (making it difficult to make port calls) or a commercial manager? Attempt a name/flag change at sea? Return to Russia, and let Moscow try another route?

UPDATE -- June 24: FEMCO announces on its website that Alaed arrived in Murmansk at 0400 GMT (0800 local) on June 24.  In its release, FEMCO confirms that the vessel will be reflagged as Russian before continuing its journey.  The company also indirectly blames foreign intelligence services for the predicament without denying the fact that it was carrying weapons (missiles, helicopters, or whatever) to Syria.
Posted by 7 Feet Beneath the Keel at 4:59 AM