The Northern Fleet held training of the emergency escape chamber on the lead Yasen-class nuclear-powered submarine "Severodvinsk", which joined the Russian Navy in June of this year.

According to Commander of the Northern Fleet Admiral Vladimir Korolev, "for the first time in the Russian period of our Navy's history, we have tested the direct applicability of the emergency escape chamber of a new nuclear-powered submarine with a test team on board."

Admiral Vladimir Korolev emphasized that "test results of the emergency escape chamber once again have confirmed that ships joining the fleet are reliable and well thought out. The careful preparation of the Northern Fleet Submarine Forces Command and the "Severodvinsk" crew for this event ensured safety execution of this highly complex combat training event."

A distinctive feature of this event was that, in the relatively shallow waters of Guba Zapadnaya Litsa, the nuclear-powered submarine, which displaces more than 13,000 tons and is nearly 140 meters long, had to submerge to a depth of 40 meters and become stable at that depth, thus replicating the motionless condition of a simulated distressed submarine on the seabed.

At the same time, the test team consisting of five men practiced steps for evacuating the simulated distressed submarine using the emergency escape chamber. In addition to the test team, inside the escape chamber was ballast that was equal to the total weight of the submarine's crew.

A second technical feature of this event was that after the emergency escape chamber with its positive buoyancy separated and freely floated to the surface, the submarine "became heavy" due to the mass of the escape chamber - and this was several tons. The crew had just a few seconds to stabilize the submarine at the assigned depth and later to safely surface.

After surfacing, the emergency escape chamber was towed to the side of a rescue vessel, and the test crew then climbed on board.

In addition to the "Severodvinsk" submarine crew, joining the training were units of the Northern Fleet's search and rescue service - the rescue vessel "Mikhail Rudnitskiy" and diver specialists.

Russian Navy Commander-in-Chief Admiral Viktor Chirkov thanked the Northern Fleet personnel who participated in testing the emergency escape chamber for the courage and professionalism demonstrated during the training event.

All modern Russian Navy nuclear-powered submarines and those currently being built are equipped with emergency escape chambers.

The Northern Fleet tested the emergency escape chamber on the lead Yasen-class nuclear-powered submarine "Severodvinsk", which joined the Russian Navy in June of this year. Elvira Serga and Konstantin Kabanets went to sea to see how this went.

The operation that the submariners had to perform, which was unique in terms of its complexity: rescuing the crew of a simulated distressed submarine using the emergency escape chamber. This evacuation method was invented 53 years ago. During Soviet times, however, only two such training events were held. And this operation is being held for the first time in the history of the Russian Navy. The "Severodvinsk" nuclear-powered submarine is already heading to the operations area.

In the shallow waters of Guba Zapadnaya Litsa, the nuclear-powered submarine, which displaces 13,000 tons and is nearly 140 meters long, has to submerge to a depth of 40 meters and become stable and motionless at that depth, thus replicating a motionless condition on the seabed.

[Sergey Grishko - Northern Fleet Submarine Forces Deputy Commander for the Electro-Mechanical Service] "For a crew with rather consistent training, this is a complex maneuver. But it's absolutely safe. Considering the support units that have been assembled for this maneuver, I believe everything will be fine."

On "Severodvinsk", the emergency escape chamber is built into the sail. One can only enter and exit the submarine through it. The chamber has the same factory of safety as that of the submarine itself. In essence, it's one more compartment. Inside of it at the moment it separates free will be five men - the test team, and ballast that is equal to the total weight of the crew. The goal is to test the reliability of the rescue system.

Air is removed from the ballast tanks, and the submarine begins to submerge. The first smoke flare indicates that the submarine has reached its position at the designated depth. The second flare is a signal that the chamber has separated.

The completely watertight compartment, a "group parachute" with people inside, freely floats to the surface. At that moment, the submarine, which became heavier due to the mass of the emergency escape chamber, goes deeper due to inertia. The crew's task is to stabilize the submarine at the assigned depth and ensure a safe surfacing maneuver.

The first phase of the operation was a success. Now this gigantic "cork" needs to be pushed to a tug and then moored to the hull for later transport to port. SevMash representatives on board the tug breathed a sign of relief.

[Viktor Pavlov - senior master from SevMash in Severodvinsk] "Of course, it was an unforgettable scene. Everything happened exactly as it was supposed to. Very cool, everything turned out very well, and I'm very pleased!" The next phase - decompressing the escape chamber and evacuating the personnel.

The entire team consisted of five testers: Sergey Balazhigitov, Sergey Melnikov, Aleksandr Dorofeyev, Igor Osaulenko, and Vladimir Serebryakov were transferred to the surface unharmed. Their names have already become part of the history of the Russian Navy.

[Sergey Balazhigitov - communicator] "I feel excellent, exhilarated, and we completed the task. We're ready for the next tasks."

[Sergey Melnikov - chemist] "Oxygen was within maximum allowable concentration limits. At the moment we surfaced, it was 21%, which means that the oxygen reserves in this emergency escape chamber ensure that the assigned tasks can be performed."

[Igor Osaulenko - test group leader] "There were no abnormal sensations - it was like being in an elevator. We rocked a little, and there was a 20 degree list to one side, and we jumped out of the water. That was it. Everything happened literally within 10 seconds, so no one had any time to really think about it."

[Vladimir Serebryakov - damage control commander] "Well, I can now say with confidence that it works, because I tested it myself. The emergency escape chamber is reliable, and it performed its function completely and thoroughly."

[Aleksandr Moiseyev - Northern Fleet Submarine Forces Commander] "This was rather serious training and maneuvers for the submarine. That is, credit goes without doubt to the commanding officer and the personnel who prepared to test this armament. This equipment was tested under factory conditions, but we tested it under conditions at its permanent home port in order to confirm our confidence in the equipment."

[Sergey Mityayev - "Severodvinsk" commanding officer] "We remembered, we read what they wrote about this, we figured it out and then we did it. A crane is now placing it on a special platform that was brought from SevMash, where both the submarine and emergency escape chamber were built. Later, after this, they'll perform specific steps to remove the ballast that was placed in it, and then use a crane to place it in its normal seated position."

After the successful operation, the crew will have a short break, and then the "Severodvinsk" crew will again go back on combat watch.

RT also released a video of the event. Below are more TASS photos of "Severodvinsk" and its emergency escape chamber. 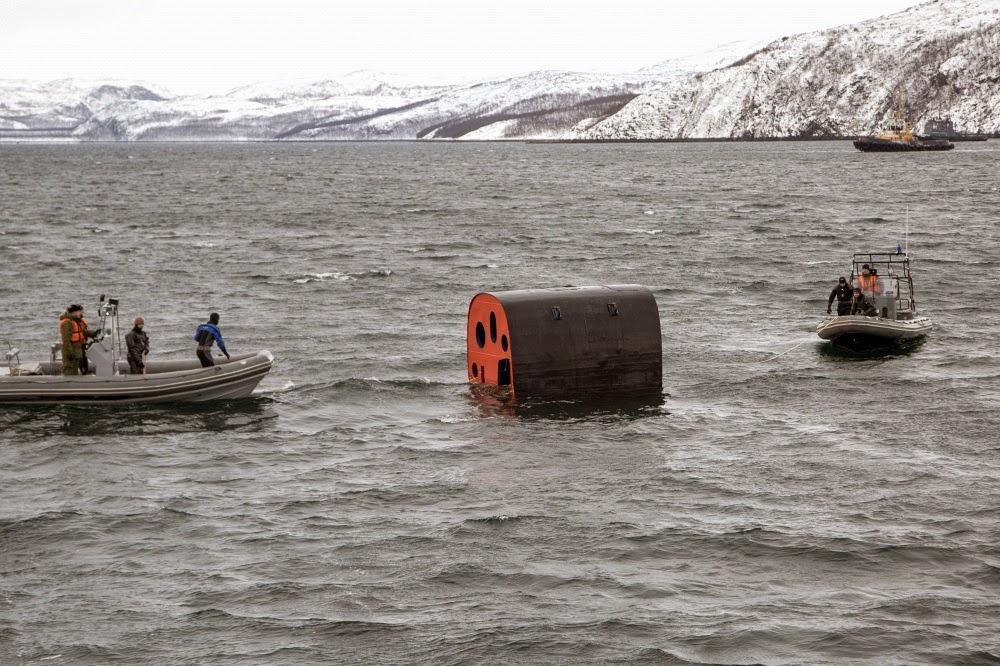 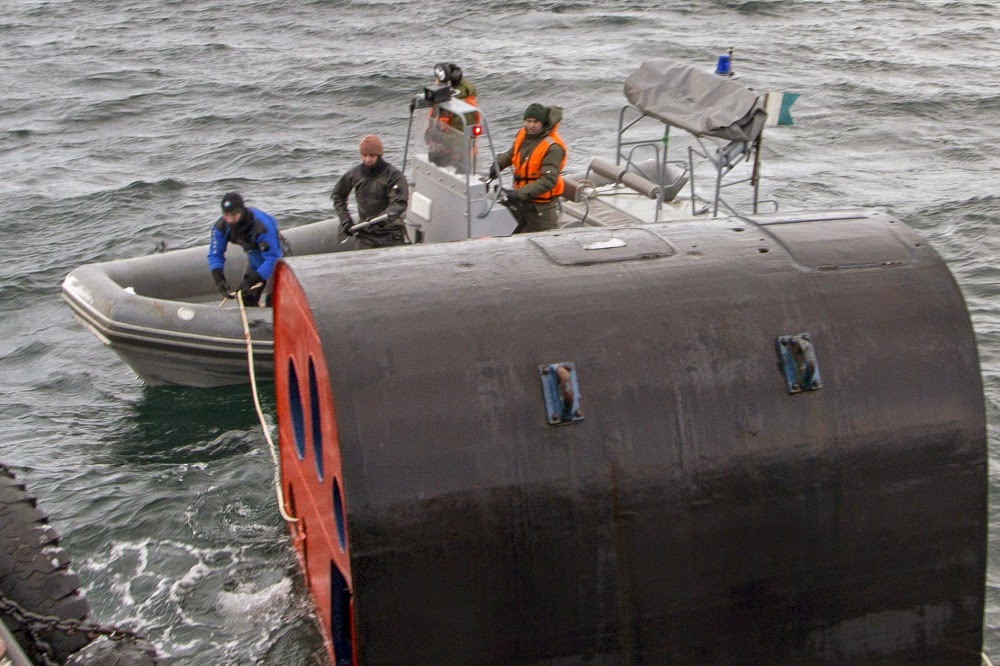 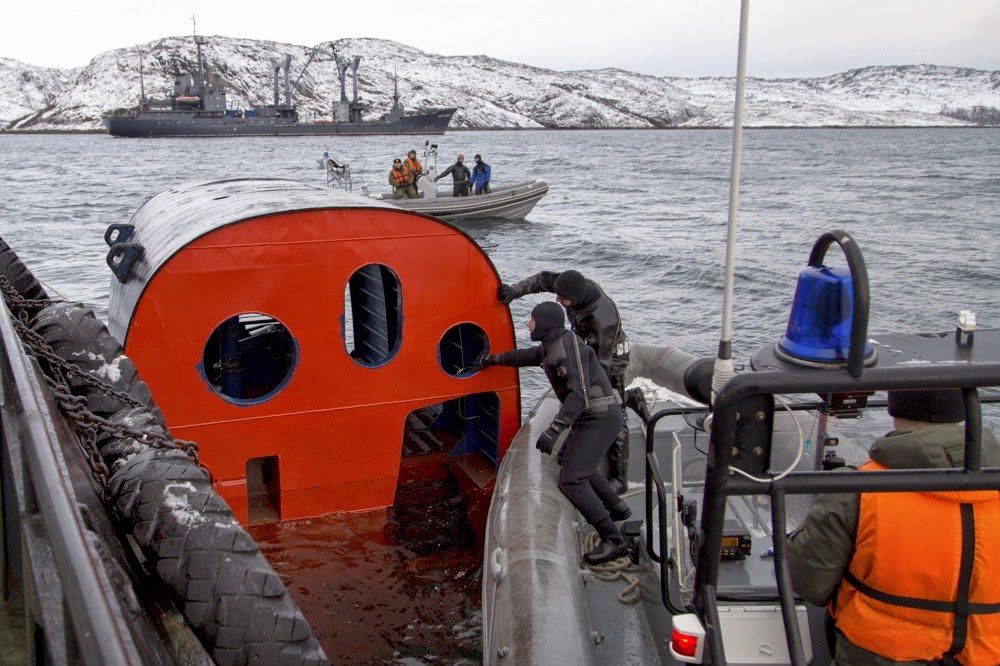 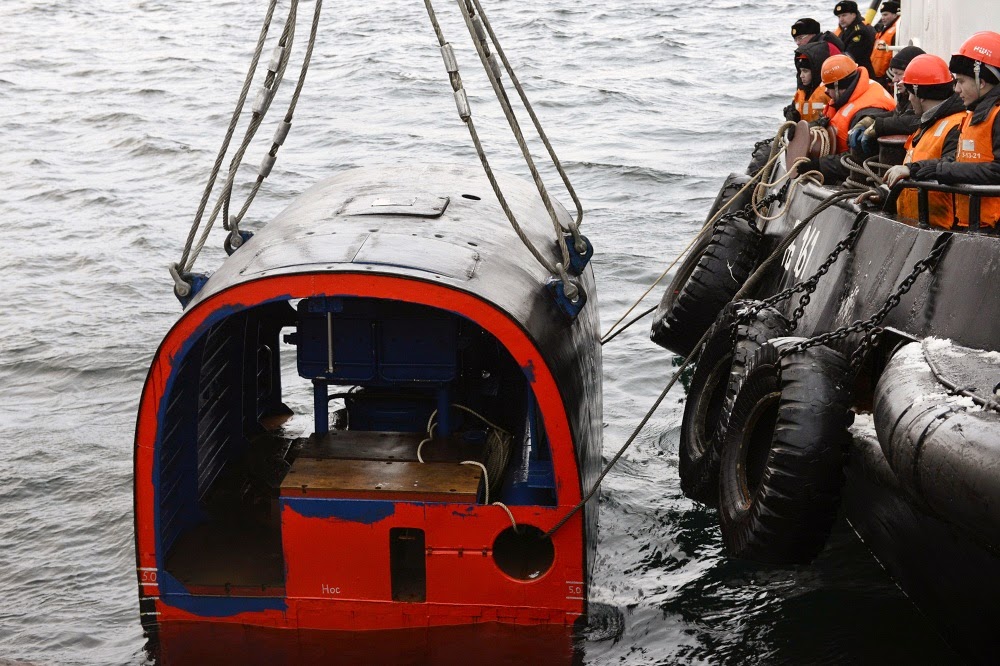 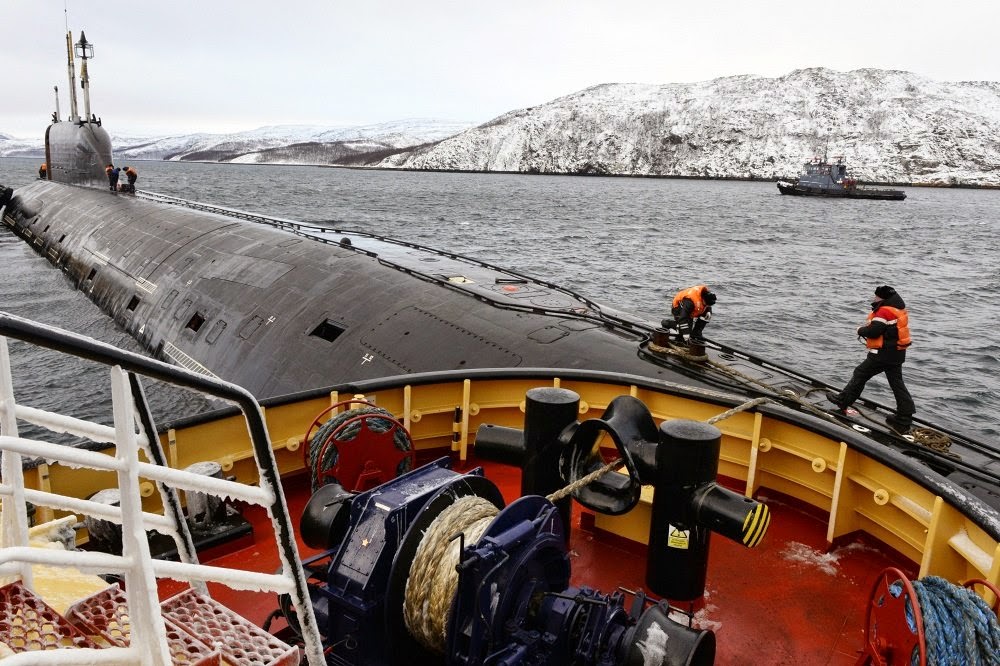 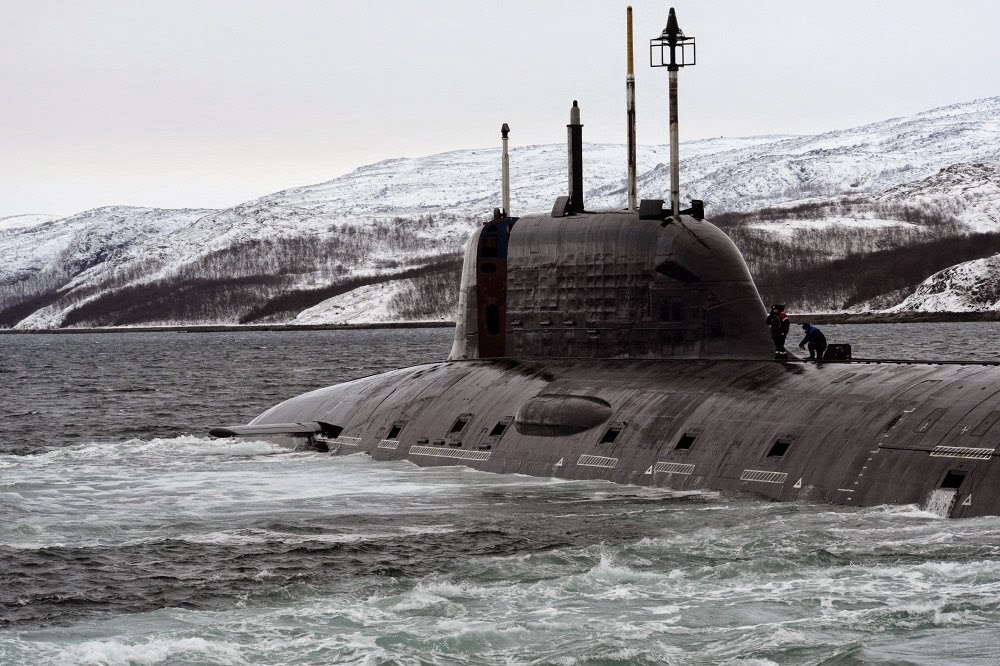