Follow-Up 1: Why Did "Rostov-na-Donu" Return to the Baltic Sea?

It has become much clearer over the past three weeks why Kilo-class submarine "Rostov-na-Donu" made its mysterious port call in Kronshtadt. And it's bad news for ISIS/ISIL, FSA, or whomever Russian forces are targeting in Syria these days. As one blog reader opined, "Don't you think that stories about its malfunction was just a rumor, and in reality the submarine came for specific items that later can be [launched] from warmer waters?"

As a recap, "Rostov-na-Donu" pulled into Kronshtadt on October 29 - the 14th day of its inter-fleet transit from Polyarnyy to Novorossiysk. Claims by both official and anonymous sources covered everything from "topping off supplies of all types to required norms" to repairing broken equipment. It seems the official sources were correct. 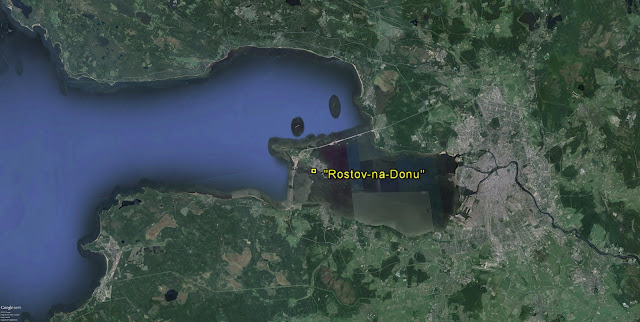 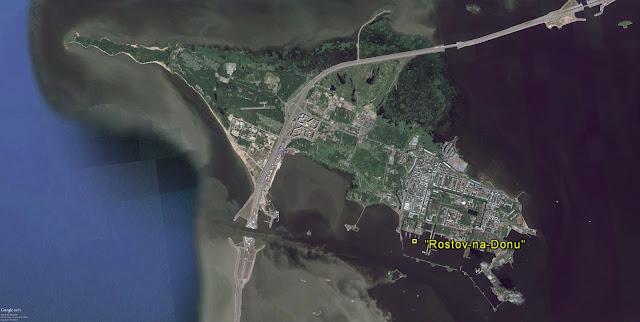 While in Kronshtadt, heightened security was put into place, limiting access to the submarine's location. However, a few adventurous photographers and one amateur drone did record enough evidence showing that missiles were handled during the submarine's visit. Given the high level of security, one might conclude that it was more likely that missiles were loaded than offloaded. 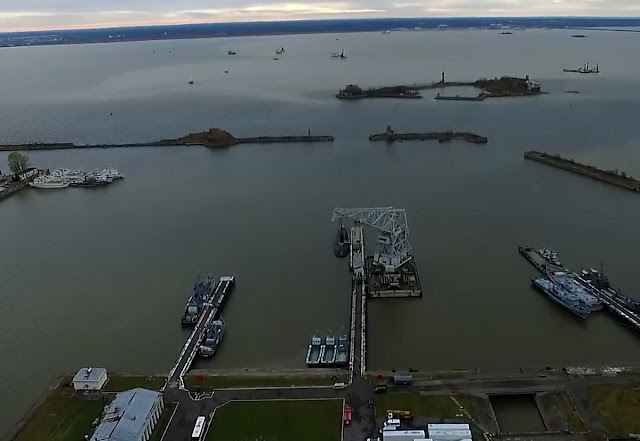 The above two images, taken from a drone flying nearby, show a floating crane ("PK-175") positioned on the opposite side of the pier where "Rostov-na-Donu" had tied up in Kronshtadt. The floating crane, assisted by three harbor tugs, transferred from Admiralty Shipyards to Kronshtadt on October 28 - the day before the submarine's arrival. Multiple long, cylindrical objects are visible on the deck of the floating crane, and the submarine's torpedo tubes are open with a possible weapons loading device attached. 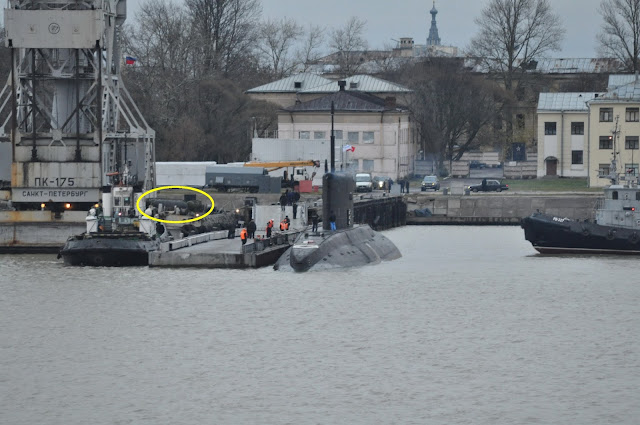 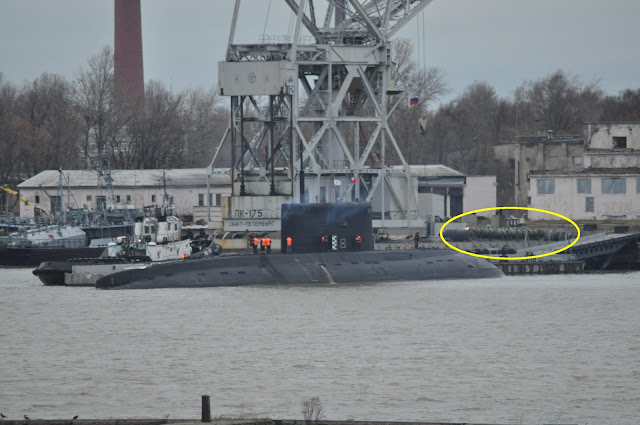 Clearer images taken on November 4, the day the submarine departed Kronshtadt, show the cylindrical objects were visible on the deck of the floating crane. Also visible on the submarine was the flag of an embarked senior naval officer. Looking back at all the photos taken of the first Kalibr-capable Kilo submarine to transfer to the Black Sea Fleet, "Novorossiysk", it is evident that this flag was never flown at any point during its departure from Polyarnyy, during its port calls in Ceuta, Spain, and Oran, Algeria, or during its arrival in Novorossiysk and subsequent transfer to Sevastopol. The flag appears to have one star, indicating a "commander of a formation" (командир соединения) is on board. The 4th Independent Submarine Brigade, which stood up in December 2014 as the new parent command for the Black Sea Fleet's submarines, qualifies as a "formation" (соединение). Thus, it is possible that the brigade's commander, Captain 1st Rank Magaram Yagishevich Adigyuzelov, or his designated representative may have embarked in Kronshtadt for the submarine's transit.

The RF Ministry of Defense did not report on the submarine's departure until November 5. It did state, however, that "Rostov-na-Donu" would now arrive in Novorossiysk by the end of November. This differs from the MOD's earlier reporting that the submarine would arrive in Novorossiysk in early December. Thus, despite the time it took to divert from its previous transit route (~1,000nm from the North Sea to Kronshtadt + ~1,000nm back) plus the seven days it spent in Kronshtadt, the new arrival time is now one-two weeks sooner than first reported. In order to transfer from Kronshtadt to Novorossiysk by November 30, the submarine would have to travel ~5,250nm in 26 days, which equates to a speed of 8.4 knots - not an unreasonable speed. It also suggests, however, that there is no time provided for any foreign port calls as they would increase the overall speed needed to complete the transit by the end of the month. Of course, the time frame provided for completion of the transit simply could have been misstated.


Two weeks later, on November 17, Russian business news agency RosBiznesKonsalting erroneously reported that "Rostov-na-Donu" had launched land-attack cruise missiles from the eastern Mediterranean Sea. The article was reproduced by some notable media outlets, such as Delovoy Peterburg, Gazeta.ru, Kommersant, and Rosbalt.ru. If this were true, the submarine would have had to travel at an overall speed of nearly 16 knots for 13 straight days direct from Kronshtadt in order to launch missiles from the eastern Mediterranean Sea. However, the submarine was being monitored by Dutch naval ships as it transited south through the English Channel near the Netherlands on November 11. Thus, "Rostov-na-Donu" would have had to travel in excess of 19 knots for six straight days from the North Sea in order to reach the eastern Mediterranean Sea by November 17. Finally, the RF MOD has never reported that the submarine launched land-attack cruise missiles, something it most certainly would have done. Despite the improbability of "Rostov-na-Donu" launching missiles from the eastern Mediterranean Sea on or before November 17, RBK has neither edited nor retracted its article.

Earlier this month, flight bans and flight route restrictions were announced for Russian Navy exercise being held in the eastern Mediterranean Sea:


Flight ban areas defined in A1459/15 and A1499/15 are identical to those previously announced for similar Russian Navy exercises. Flight ban area A1510/15 is of interest as it is not known to have been used before for Russian Navy exercises. And while all of these bans expire on or before November 26, there is no reason to believe they would not be reannounced, if needed.

Of course, it would be easy to draw a direct correlation between the flight bans (those already announced and those that could be announced in the near future) and the unusual "Rostov-na-Donu" story. But...