In previous years, residents of St. Petersburg could walk along the Neva River on Victory Day and Navy Day and see several ships and even a submarine anchored on the river or moored at quays or floating piers on both sides of the river. And that's how this year's Victory Day preparations began on May 2 with the arrival of a new diesel submarine (Kolpino) and two light frigates (Urengoy and Zelenodolsk). On May 3, they were joined by two mine warfare ships (Aleksandr Obukhov and RT-57). On May 5, three Baltiysk-based warships (Liven, Morshansk, and Serpukhov) arrived in the St. Petersburg area and were expected to take their places on the Neva River over the next few hours. 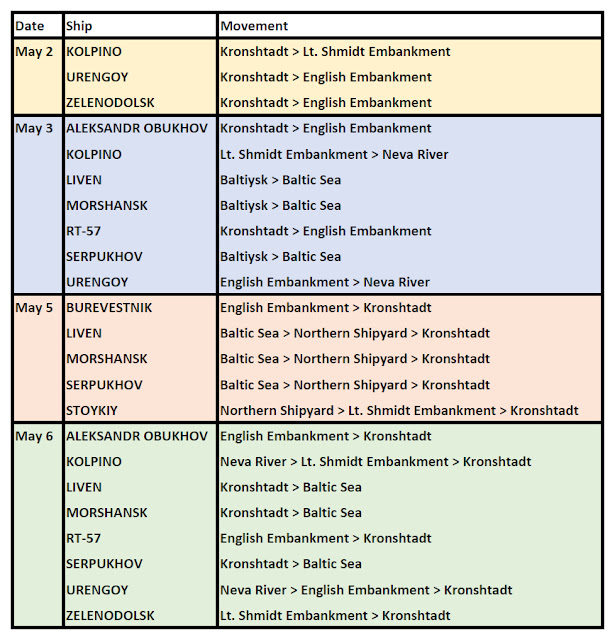 But that's when the mystery began. Minutes after arriving near Northern Shipyard, all three warships reversed course and headed to Kronshtadt. The fleet commander's launch (Burevestnik), which was moored at a Neva River quay, also left port en route to Kronshtadt.

Today, all the remaining naval ships departed St. Petersburg heading to Kronshtadt. And Liven, Morshansk, and Serpukhov, which never got the chance to moor on the Neva River, departed Kronshtadt heading back to sea, presumably to Baltiysk.

As defense officials have provided no explanation as to the sudden departure of all scheduled Victory Day participants, everyone is left scratching their heads.


One popular theory is that the weather in the St. Petersburg will be extremely poor over the next few days. Yes, it will be rainy or overcast most of the time. And the winds will kick up to 7 meters per second (15.7 miles per hour or 13.6 knots) on May 8. But is that too high for ships to be moored on the Neva River?

Another theory is that the Baltic Fleet may be subjected to a surprise inspection in the next few days, and the ships are returning to their respective bases to prepare.

Of course, it's not a surprise if you already know about it.
Posted by 7 Feet Beneath the Keel at 10:55 PM


On October 10 of last year, RF Deputy Minister of Defense Nikolay Pankov stated that documents had been prepared for establishing a "naval base, on a permanent basis, in Tartus." On December 23, RF President Putin signed Directive 424-rp, ordering the Ministry of Defense to work with the Ministry of Foreign Affairs in coordinating and signing an agreement with Syria on expanding the existing RF naval logistics support facility in Tartus. That agreement, which was signed in Damascus on January 18, allows Russia to expand the facility and remain there until at least 2066. But missing from Putin's directive and the final agreement is the term "naval base."

As any annexes to the agreement will remain confidential (Article 16), it is difficult to fully assess the extent to which the facility will be expanded. For example, the specifics of infrastructure upgrades supporting ship repairs (Article 2) are not stated, but could include a number of options, such as the basing of a floating dry dock at the facility. Such a move would require additional waterfront space and/or upgrades to the existing territory.

But why there is no mention of a naval base in the agreement?

According to Nezavisimaya Gazeta reporter Vladimir Mukhin, Iran has expressed concerns about the increased role of Russia in the Middle East, Russia and Turkey teaming up to settle the Syrian conflict, and Russia's intent to work with the U.S. and other countries as part of a coalition. Reading between the lines, Iran's concerns could have led to a change in the wording of the agreement - from the establishment of a naval base to a simpler, friendlier expansion of the existing logistics support facility.
Posted by 7 Feet Beneath the Keel at 11:58 AM