A year after emerging from bankruptcy, Amur Shipyard finds itself in a bind partly due to a miscalculation of contract costs. And if the contracts aren't signed soon, the delivery of a repaired Kilo-class diesel submarine could be delayed until 2016.

In January 2006, the Russian Ministry of Defense signed a contract (253/05/2/K/0038-06) with Amur Shipyard for the construction of Steregushchiy-class frigate "Sovershennyy". The ship was laid down on June 30 the same year. The two parties signed a supplementary agreement (704/27/2/ONK/DN6/0105-10) in February 2010, four years after the original contract was signed. In November 2011, a second supplementary agreement (Z/1/1/0635/D10-11-DGOZ) was signed to continue the contract after the shipyard was declared bankrupt. In February 2014, following a visit by defense minister Sergey Shoygu, a new contract (Z/1/1/0047/D17-14-DGOZ) was signed to establish new costs for the construction of both "Sovershennyy" and "Gromkiy" (a second Steregushchiy frigate laid down in February 2012). The new contract was signed four months before Amur Shipyard officially emerged from bankruptcy. On May 22, 2015 - nine years after being laid down, "Sovershennyy" was finally rolled out. 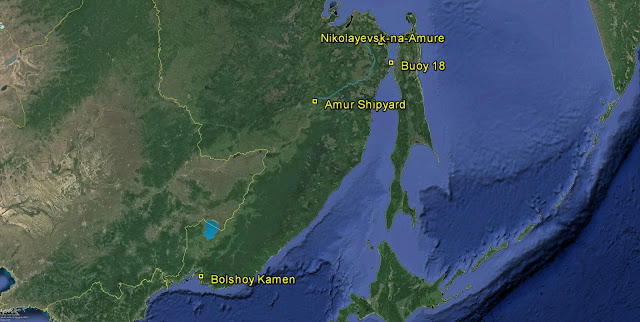 On May 26, Amur Shipyard approved a purchase package (RUB 81,900,000) for towing "Sovershennyy" in the shipyard's transport dock "Zeya" from Amur Shipyard to its outfitting subsidiary in Bolshoy Kamen and then back to Amur Shipyard. The towing operation was scheduled to begin no later than August 19 and involve two 600hp (or greater) tugs and one 1,800hp (or greater) tug. A month later, however, the package was withdrawn in order to modify the technical specifications of the work package.

Last week, Amur Shipyard approved two new purchase packages for the operation. The first package (RUB 49,600,000) only covers the tow route from the shipyard to Buoy 18 on the Amur Estuary and (after returning from Bolshoy Kamen) back to the shipyard. The second package (RUB 88,560,000) covers the route from Buoy 18 to Bolshoy Kamen and then back to Buoy 18. The tug requirements and start dates were also modified for both routes. Comparisons of the 2014 and 2015 contract packages are shown below.

Comparing the cost differences between the May package and the July packages indicates the original cost calculations were off by RUB 56,260,000. Amur Shipyard signed a similar contract (RUB 25,000,000) in 2014 for towing "Zeya" one way between Buoy 18 and the shipyard. If you double the amount, it matches nicely with the RUB 49,600,000 in the July 2015 purchase package that includes two-way towing services.

Miscalculations aside, it's amazing that Amur Shipyard has not yet signed towing service contracts for this transfer. The new contracts specify that the towing operation should commence no later than August 5 and that "Zeya" should be returned to the shipyard no later than September 1.
The dates are important because Amur Shipyard also plans to roll-out Kilo-class diesel submarine "B-187" and transfer it to Bolshoy Kamen this year. The transfer has to be completed before Amur River becomes unnavigable due to the onset of ice conditions in late October. Any delay in transferring "Sovershennyy" could jeopardize the transfer of "B-187" this year.
Posted by 7 Feet Beneath the Keel at 3:47 PM