XLT: How Patriots are Slashing the Nation's Defensive Capability

HOW PATRIOTS ARE SLASHING THE NATION'S DEFENSIVE CAPABILITY
January 9, 2015
http://yurnik-br.livejournal.com/10387.html

Foreign analysts looking at the growth of military budgets are concerned about the "Russian bear" for no good reason. No, its claws are not extending out, it's not snarling and showing its menacing teeth. Yea, it might growl a little. But its teeth and claws have been cut off - and not by external, malicious enemies, but by an internal bone infection.

SevMash needed welders and assembly workers. It would seem you could turn to the State Labor Service and invite specialists from across the nation. Or even prepare your own or get them from your competitors. But, no - SevMash, right before the New Year, on December 31, announces a competitive bidding process for "provision of services to supply personnel." Additionally, this was not an auction, but rather the purchase from a single-source provider.

And who is this single-source provider? Could it be a head-hunting agency? Or at least the State Labor Service? No, the one and only suitable entity was Telekort Pomorskiy LLC, which was registered as a company on September 1, 2014.

And if you look at the contract, which has already been signed by both parties and stamped - there is no date! 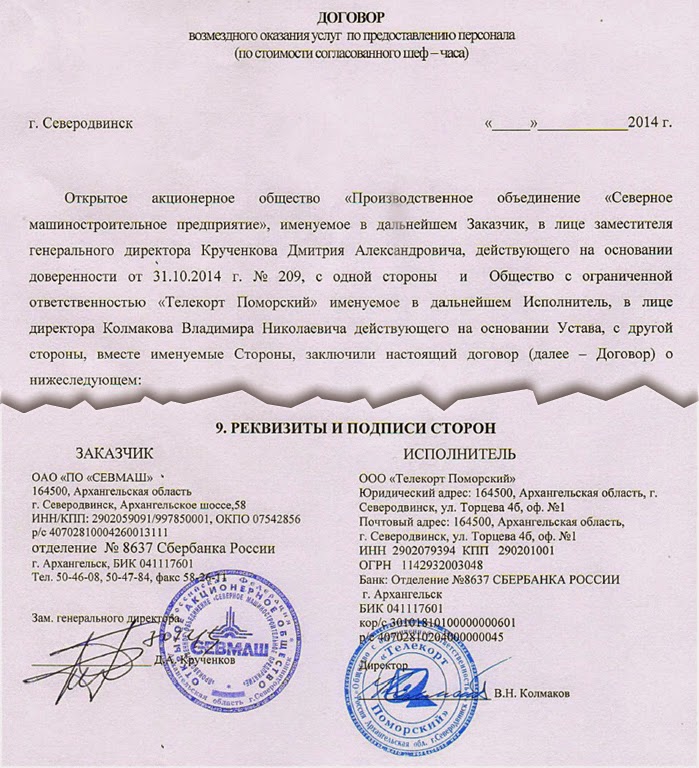 At the same time the, sum that the defense firm is paying the young, but unscrupulous company ‒ 610 million 368 thousand rubles.

In Sevastopol, 44 million rubles were stolen for repairs of Black Sea Fleet ships. But that's just kopecks compared to the Severomorsk [sic] siphoning. By the way, the coincidence of the last names of the director of the "single-source provider" and the deputy defense minister, who visited SevMash in 2008 ‒ is that really a coincidence?

P.S.
On the page of Gennadiy Akinfeyev from Severodvinsk - the same name and residence as the owner of Telekort Pormorskiy - is this picture.

Me thinks that with patriots such as these, we don't need sanctions ‒ we'll siphon, waste, and destroy everything ourselves.
Posted by 7 Feet Beneath the Keel at 1:10 PM